“Useful indiscretions”–In Kavanaugh, we see the system defending itself 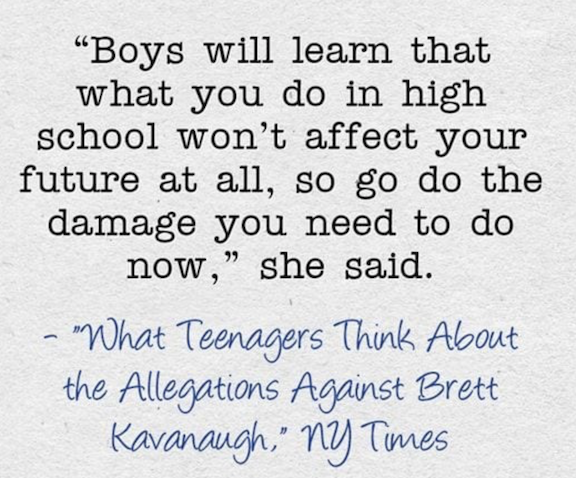 In my last post about Brett Kavanaugh I initially had a typo: I wrote “useful indiscretions” instead of “youthful indiscretions.” I though that was a strange mistake at first but now I think it pointed directly to the deeper meaning, that our sexist-authoritarian system of power needs many men like young Brett Kavanaugh to make a deal with the devil: through an initiation into manhood that involves sexually absusing women, they inherit the systems power and privilege….and complicity for its crimes against women as well. Now we see that system, from Fox News to the Senate Judiciary committee to the White House, fighting like hell to defend Kavanaugh. You might wonder why they are defending Kavanaugh so strongly, rather than dumping his nomination and picking another conservative justice from the Federalist Society list. The truth is, when they defend Kavanaugh they are defending themselves, their system of power, their privilege. “Bros before hos” at the highest levels of power. However it is 2018 not 1991–the facade is breaking, and in the #MeToo era, women and many male allies are not having it!

Here are my 3 recent posts on this issue, as inspired by my work as the co-author of Doing Right by Our Kids–Protecting Child Safety at All Levels, and Executive Producer of the documentary The Rape of Recy Taylor. In Doing Right by Our Kids we propose many solutions that can help stop abuse at all levels of society, and I truly believe that to be effective we must act at all levels.

What Brett Kavanaugh, Roy Moore and more tell us about white male privilege and complicity. September 21

Healing our culture by breaking the cycle of abuse, guilt, complicity and privilege. September 23